Aikido — literally “the way of harmonious energy” — is both a philosophy and a physical discipline. Aikido is a relatively recent martial art, developed in the early 1900s by Morihei Ueshiba, known as O-Sensei Great Teacher. As a young man, he was an extraordinary martial artist, a master of the sword, the staff, the spear, and the art of ju-jitsu. But O-Sensei also had a strong spiritual drive, and brooded over the futility of a path based on victory over others. Leading a life of austerity and rigorous training, he struggled with this dilemma. It was resolved in a moment of profound awakening. Transformed by his spiritual insights, O-Sensei’s technical mastery evolved into a martial art of refinement and astonishing power, fundamentally different from those that preceded it. He wrote: “The secret of Aikido is to harmonize with the movement of the universe and bring ourselves into accord with the universe itself.”

Aikido techniques work through redirecting an opponent’s movement through evasive and circular motions. Even when the Aikidoist seems to be moving straight ahead or backwards, the Aikidoist’s movements are in fact off the line and circular, giving the Aikidoist the opportunity to use balance, leverage and gravity against an opponent. Aikido can seem almost magical at first with attackers flying through the air or dropping in pain from what appear to be effortless movements on the part of the defender. However, it’s not magic but movement that makes Aikido so effective.

Ultimately, it is the energy of the attack itself which brings down the attacker. Although increased stamina, flexibility and muscle development occur naturally as a result of training, strength is not necessary. As a result, Aikido can easily be practiced by men and women of all ages.

Aikido is a non-competitive martial art. There are no tournaments or competitions. Learning is by repetitive practice of movements and techniques with a partner.

Aikido of Santa Barbara is a 501c3 non-profit organization whose mission is to enhance the physical, mental, and spiritual health of youth and families by cultivating their minds and bodies through the knowledge and practice of the traditional Japanese art of Aikido.

Aikido of Santa Barbara teaches a non-competitive, non-combative physical art that places emphasis on non-violent resolution, tolerance of others, and overall social harmony.

Aikido of Santa Barbara programs serve to enhance the quality of life for those participating, and enable the dojo to cater to the diversity of the community. Sponsors, such as The Balm Foundation, help to make this happen by underwriting programs like the Santa Barbara Junior High Aikido Class.

At Aikido of Santa Barbara, diversity, equity and inclusion are at the core of who we are. Our commitment to these values is unwavering and is central to our mission and our practice. Aikido of Santa Barbara does not tolerate any form of discrimination, exploitation, or harassment of anyone for any reason including, but not limited to, any characteristic protected by law. 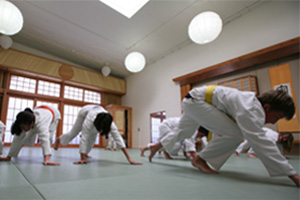 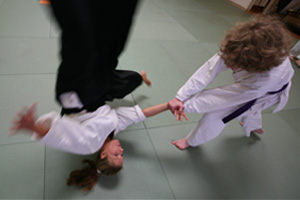