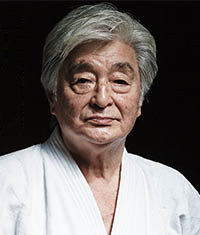 Yoshimitsu Yamada Shihan, a direct student of O Sensei for more than ten years,is an 8th dan and the chief instructor at the New York Aikikai.

Yamada is president of the United States Aikido Federation and chairman of the Latin America Aikido Federation. He is the author of the book Aikido Complete, and has made multiple aikido training tapes, including the “Power and the Basics” series, which outlines the requirements for rank testing of all levels.

With the deaths of his colleagues Akira Tohei in 1999, Mitsunari Kanai in 2004, and Seiichi Sugano and Nobuyoshi Tamura in 2010, Yamada is one of the most senior living representatives of the last generation of direct students of Morihei Ueshiba.

The United States Aikido Federation is a non-profit organization made up of affiliated Aikido dojos and clubs from all areas of the United States. It is recognized as an official representative of the Aikikai Foundation, Aikido World Headquarters in Japan.

The USAF serves the interest of it’s affiliated dojos by developing and improving the practice of Aikido, establishing grading standards, and representing the interests of its members in the Aikikai Foundation.

The USAF registers all dan (black belt) grades with the Aikikai Foundation and all kyu (non-black belt) ranks within itself. It promotes many seminars and training camps throughout the United States and also publishes Aikido East, a quarterly email newsletter.

The USAF is organized with a Board of Directors made of senior USAF members and a Technical Committee comprised of a group of Shihan resident in North America.